The Trump administration’s coronavirus task force stepped up its calls for Americans to wear masks as cases surge in some states but Vice President Mike Pence said there are no plans to override governors who have yet to require them.

“Please, please, please wear a face covering when you go out in public,” Surgeon General Jerome Adams, a member of the task force, said at a briefing Tuesday.

Adams delivered the strongest plea to the public yet from an administration that has often sidestepped direct recommendations to wear masks. Health and Human Services Secretary Alex Azar and Pence both urged wearing a mask at the event in Rockville, Maryland, though Pence only said to do so if local authorities recommended it.

Pence himself wore a mask before he began speaking.

Several Southern and Western states are seeing an escalation in new case numbers, prompting some to put off reopening plans. 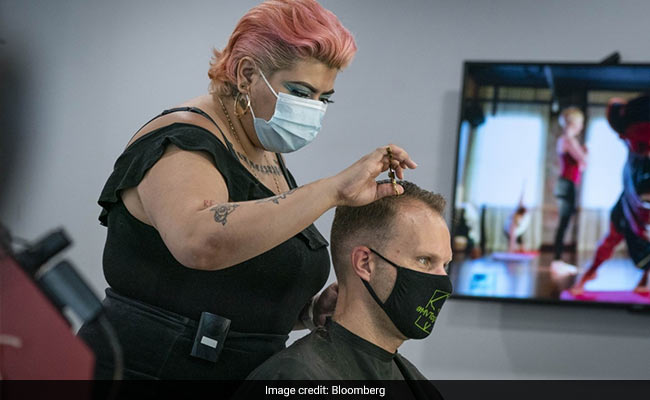 Coronavirus: Health authorities around the world have also asked people to wear mask

The call for masks came on the same day infectious-disease expert Anthony Fauci told a Senate panel that the U.S. is “going in the wrong direction” in its effort to contain the novel coronavirus and daily case counts could more than double if behaviors don’t change.

Pinpointing indoor gatherings, particularly bar scenes with lines out the door and patrons standing shoulder to shoulder, Fauci said new cases of Covid-19 could rise to 100,000 a day, up from the current level of about 40,000.

Pence said to “wear a mask, wherever it’s indicated or wherever you’re not able to practice the kind of social distancing that would prevent the spread of the coronavirus.”

He also made it clear that there are no plans to issue national requirements on masks, allowing states to manage their “unique circumstances.”

“And we’ll continue to use that model, respecting the decisions that governors are making,” Pence said.

But Adams called for Americans to wear masks — not just where there are mandates to do so — and said the face coverings don’t restrict freedoms.

“It actually is a vehicle to achieve our goals, it adds to your convenience and your freedom, because it allows us to open up more places and it allows those places to stay open,” he said.

President Donald Trump has mocked his Democratic challenger Joe Biden for wearing a mask and has never publicly worn one, though he is facing calls to do so.

In some parts of the country, the issue has gone from a health issue to a political one.

In Colorado later Tuesday, Governor Jared Polis said he thought “there’s been a breakthrough because you have Mike Pence wearing a mask. You have the governor of Texas and Arizona saying everybody needs to wear a mask. These are staunch conservative Republicans. This is not an ideological and partisan thing. It’s a science thing.”

“For a while, unfortunately, like too many things across society, it all seemed to become like an ideological thing or even a party thing,” Polis, a Democrat, told reporters in Denver.

– With assistance from Vincent Del Giudice.

(Except for the headline, this story has not been edited by NDTV staff and is published from a syndicated feed.)

Video Shows Man Forced To Dance Inside UP Police Post